The former governor of Oklahoma, JT (Josiah Thomas) Cahill was elected President of the United States in 2016. A big, beefy guy in his mid-fifties whose brown hair has been a dye job for about a decade now, he loves fried chicken, barbecue, and Oklahoma-style chili almost as much as he loves "the Yewnited States of America." Cahill’s southern-fried good ol’boy exterior disguises a steel-trap mind on the inside. He makes much of his deep roots in the Oklahoma Panhandle and rarely dwells on his 4.0 average at Harvard. His wife Rachel is from Oklahoma’s Comanche country in the southwestern part of the state and ten years his junior, a short woman with raven-dark hair who speaks both English and Comanche fluently. Their three daughters Jaybee, Jaycee, and Jaydee (16, 14, and 12) are the apples of their daddy’s eye.

A beloved professor of political science and American government at Oklahoma Panhandle State University before turning to politics, Cahill ran as an outsider promising to bring change to Washington after years of rule by political insiders. In general, he’s a conservative who wants to cut taxes and un-American regulations, build up the military, and bring back morality and decency to the public square. 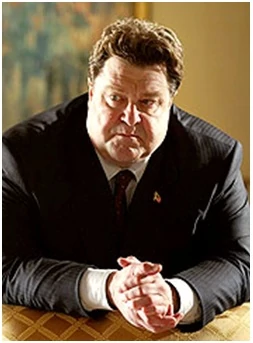 President Cahill is a vigorous champion of and defender of superheroes, seeing them as “one of the many blessings of living in the greatest nation on Earth - America.” He engineered public funding for Sooner (Oklahoma's officially sponsored superhero and a friendly rival of the Barnstormers) while serving as Governor - and would be happy to see more federal money sunk into supporting America’s superheroes. During the 2016 campaign, he openly flirted with reversing decades of policy and establishing a US government-funded team. He’s less interested in non-American superheroes but he’s “not gonna make an enemy out of a lady who could throw the White House into Saturn faster’n a cow could jump over the Moon!”