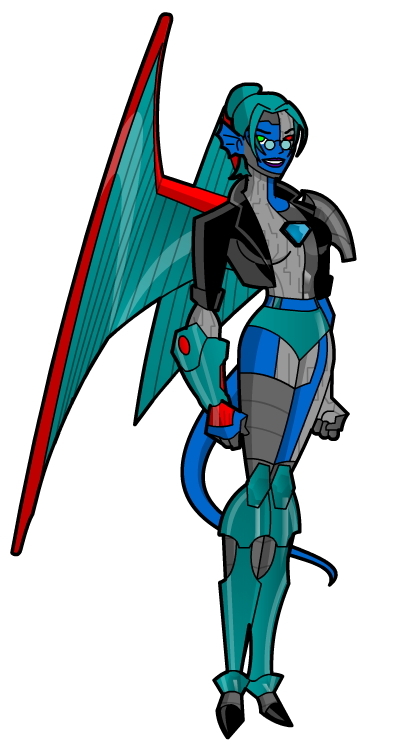 Alien engineer who fused with a spaceship, becoming capable of controlling machines in the process, and joining the order of the Praetorians.

History
Vyrdnaya Solnys-Kori Milareth was born into a relatively wealthy family in the Akarnia Planet of the now long gone Delaztri Empire. Despite having had all comforts available to her, Vyrdnaya had nevertheless managed to grow into a responsible young woman, and through her studies, she quickly developed an interest in engineering. While she'd frequently have arguments with her parents, who were far too oldfashioned for her liking, she held them both dearly. After graduating from college, she decided to enlist in the Delaztri Empire's military, wishing to join the exalted ranks of the Praetorians. Unfortunately, she couldn't meet the recruitment standards for the Praetorian guard, and instead was enlisted as a regular military personel instead.

Service in the military wasn't easy. An unfortunate short-lived affair with a fellow officer left her pregnant, and her parents, who weren't very supportive of her being a lowly military officer, forced her a choice; either marry Jihiskh Mavon-Kuros Ainour (an old university colleague of Vyrdnaya who was making rounds in the field of interconnectivity), or refuse to give her any further support, lest she decided to quit the military. Caught between the proverbial rock and a hard place, Vyrdnaya aqcuiesced to the marriage, after reaching an understanding with Jihiskh, who was also being forced to the marriage by his own parents. The marriage finalized, the two returned to pursuiting their respective careers, and Vyrdanya eventually gave birth to Solmav.

Despite all setbacks, Vyrdnaya's engineering talent didn't take long to shine through, and she was being steadily promoted in rank, eventually becoming Lieutenant Commander. Things were also looking up for her, vis-a-vis her marriage, as Vyrdnaya and Jihiskh found themselves warming up to each other, and eventually falling in love. Their newfound relationship led to the births of Triinareti and Tormug, and the five enjoyed the next 15 years, not as strangers who happened to be together out of necessity and convenience, but out of love and understanding. During this time, Vyrdnaya was eventually transferred at the ship that she would serve, remaining there for three years, before the Communion attacked.

During the climactic battle, the Warp Engine of the Delaztri ship was severly damaged. Vyrdnaya ordered the other engineering crewmembers to evacuate the engine room, while she stayed behind to ensure that it would remain operational. A sudden explosion caused the warp to go haywire, and Vyrdnaya got caught in the surge of energy that teleported her inside the fusion engine. This was a death sentence... or it should have been one. Instead, Vyrdnaya's body was infused with the ship, deep inside its engines, and her consiousness was left wandering the ship's network, with no way to escape or interract with the outside world. Until one day, the Praetorians, not long after being revived in the present, discovered a strange subroutine that was running in the background of their ship.

After a few Giga Cycles (roughly months, by Terran calendar standards) of trainning in combat and in her powers by the senior Praetorians, Vyrdnaya joined the latest battle against the Communion, in an event that would be known as the Incursion. Having adopted the monicker "Mater Vyrdna", and as an honorary Praetorian, she would help the allied forces to storm the Communion Mothership, and shut down its communications systems, dealing a massive blow to the Communion Hive-mind. With the Communion's destruction, the allied forces would go on to establish the Coalition, and the Delaztri survivors would go on to reinstate the order of the Praetorians, electing Paradigm as their Imperiatrix, and formally inducting many new recruits, Mater Vyrdna among them. Ever since, Vyrdnaya has found herself a new home, and a new purpose; to honour her fellow Praetorians' faith in her, and to ensure the protection of theirs and their ideals.

Costume and Appearance
Mater Vyrdna's body has been fused with random mechanical parts, with various patches of blue colored flesh serving as proof that she once had been a purely organic lifeform. Especially standing out, half side of her kneck, and the upper-left part of her head, are comprised of machinery, while her fin-like ears and her blue tail betray her heritage as an Akarnian, and a Meso-Akarnian at that. Her medium-lenght hair is coloured Hazel Green, same as her eyes, and it is tied in a knot. She dons a pair of glasses, mostly out of habit.

Mater Vyrdna's form, and specifically, the mechanical parts of it, is often subject to change, depending on the situation, such as materialising wings, transforming her limbs into weapons, or even her entire body melding into an external machine. In fact, most clothing she is often seen sporting are fabricated from the same techno-organic substance that her body is made up from, and fashioned into shape by her own will.

Powers
Mater Vyrdna can control machines. This includes, but is not limited to, reconfiguring and transforming machines at the merest touch, granting them sentience, and exerting mental control over them. These powers apply even to her own body, allowing her to shapeshift her limbs into rayguns, hammers, laser swords, rocket launchers, drills, etc. She is able to meld with machines, allowing her to transfer her body through them. Finally, she can directly communicate with machines.

Allies
The Praetorians are Mater Vyrdna's foremost allies. They are in fact the closest thing to a family to her, especially the ones hailing from the fallen Delaztri Empire of 2000 years ago. Of those, special mention goes to:

Since the reestablishment of the Praetorians, many new individuals have joined the group's ranks. Mater Vyrdna's stance towards them is more ambivilent, given that they lack the connection to the Delaztri Empire that she and the Senior Praetorians have. As such, she is often cold, dismissive, or aloof to them, a deliberate attempt on her part to disassociate herself from them, to not form attachments with them, and to ensure the safety and well being of the Delaztri Praetorians. However, when duty calls, she is willing to set aside her differences with the new Praetorians, and work with them in order to accomplish their given objective. As a side effect of that, she seems to have formed a great deal of respect, and a good working rapport, with the following non-Delaztri Praetorian allies of hers: